« You’re buying the wrong size t-shirts for your band (and it’s costing you money!)
Vinyl, bombs and afrobeat – Frank Gossner of Voodoo Funk talks to us. »

Get inspired — iconic and innovative approaches to music merch

So, you’re in a band, you’ve written a few songs and they’re sounding pretty good. You’ve even chosen a name you all agree on. Now comes the time to let people know who you are and what you do and, for that, you’ll need a brand. Doodled some ideas on the back of a receipt but you’re not really feeling the inspiration flowing? Then this article is for you.

Before you get started, bear in mind that creating a logo or artwork shouldn’t be a quick job. Think about how you want to represent your band and whether what you’ve created fits with your style. After all, this will end up adorning most of your merch. An instantly recognisable logo or a clever piece of eye-catching artwork can help you stand out from the crowd and, as these examples show, if you hit it big it could even become more well-known than your music. 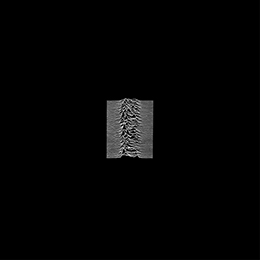 Starting with an obvious one, Peter Saville’s iconic cover for the post-punk band‘s 1979 debut album is one of the best-known pieces of band artwork ever. Created from an image guitarist Bernard Sumner took from The Cambridge Encyclopaedia of Astronomy, it is both instantly recognisable and a masterclass in simplicity. It’s still as popular today as it was on release and can be found on t-shirts, mugs and, well, everything really. In fact, people love it so much they even get it tattooed on their bodies. When it comes to creating your artwork, remember — sometimes simple is best. 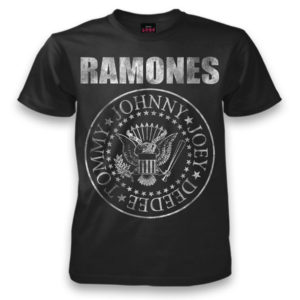 Arturo Vega’s famous logo for the Ramones shows that putting careful consideration into how a band is represented can pay off. The black and white design plays on the American presidential crest to reflect the band’s all-American persona, and while the symbolism may have been diluted over the years the band’s influence definitely hasn’t. Some might argue that the logo is over commercialised (you can pick up a cheap Ramones t-shirt pretty much anywhere) but if anything, it’s testament to its staying power. When it comes down to it, it’ll always be cool. 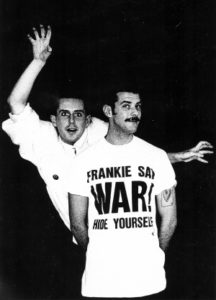 If you’re looking to support a cause you feel strongly about, have a statement you want to be heard, or lyrics that you’re really proud of, think about letting your words do the talking. Slogan t-shirts can rally people together and make a strong statement, as Frankie Goes to Hollywood proved back in the 80s. The band was already causing controversy thanks to the release of the suggestive ‘Relax’ and the politically-charged ‘Two Tribes’; adding a clever t-shirt marketing campaign stirred things up even more. Their black and white ‘Frankie Say Relax’ slogan t-shirts tapped into the culture of the time so successfully that they’ve been associated with the band ever since.

If controversy isn’t your thing then you can always go for a more lighthearted approach. For a great example, look no further than Newport’s finest, Goldie Lookin’ Chain, who use their merch to share a little love for their local area. With song names like ‘Newport State of Mind’ and ‘Drop it Like it’s Splott’ they’re quite possibly South Wales’s proudest citizens, and that’s exactly why their fans love them. It makes perfect sense that their Dizzyjam store is full of merch with these names front and centre.

Great name, great music, even greater merchandise. BSP’s dedication to all things outdoors is shown clearly through their consistently inventive and fun merchandise. In addition to quirky gifts like branded travel mints and boxes of fudge, their clothing and mugs fit perfectly with the band’s love of the countryside and nature. Their latest t-shirt, for example, features names of must-visit coastal places in the UK. 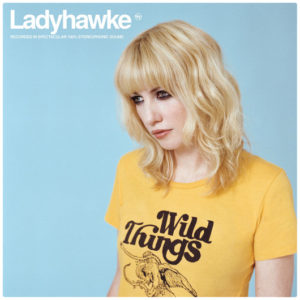 Blur’s brilliant ‘Coffee & TV’ was understandably one of their biggest songs, but one of the other reasons people loved it was for its video featuring Milky, the oh-so-cute milk carton that heads out in search of a missing Graham Coxon. In a smart move, Blur gave the fans what they wanted — the chance to own their own Milky carton which, not surprisingly, sold out instantly on release.

While you might not be able to stretch to custom products, there are still ways to tie your creative ideas together. The cover art for Ladyhawke’s new album ‘Wild Things’ features her wearing a t-shirt with the album’s name on it. It’s not just a clever way to show the title, you can also buy the same t-shirt from her store. When it comes to planning for your merch, think about how you could tie it in with your artwork or live shows. Do you wear a certain t-shirt for live gigs or have a thing for trucker caps? Put them in your store!

Ok, so these bands have also written some of the biggest songs of their generation which may have helped give their profile a boost but we’re sure your music has the potential to do the same. What these examples show is that with a little imagination, the designs you create can be a powerful tool in helping you on your way.