Hello there! My name is Michael. I’m a bass-playing designer over at Defy Designs, and I also work for Burning Red. I’m writing a guest post for the fine folks over here at Dizzyjam, and I’ve decided the best thing to talk about is the importance of quality design in the music industry.

What gives me the right to talk about this? Well, I started to train as a graphic designer in 2002, I’ve got a BA and MA in design, I’ve spent 8 years in a few bands that have seen some road miles, I work for an amazing design agency and I’ve been part of the Spillers Records ‘family’ since I was about 15. Oh, and I’ve got more band t-shirts than I know what to do with. Seriously, a few years ago I decided to wear one shirt a day until I ran out. I started on the 1st January and gave up in March because I got bored, even though I still had plenty more to spare. 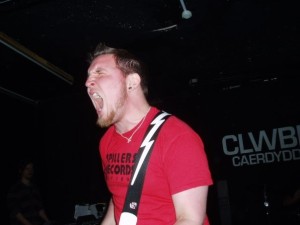 It’s strange to think in the age of mp3s and streaming services, it’s possible that the least profitable part of the music industry is the ACTUAL music (I’d just like to say that I’m a staunch supporter of physical music and independent music shops). My band are almost finished recording our album, we’ve spent approaching £1500 and if we, just another local band, want to stand any chance of making a return on that, then we need to get creative…

Vinyl is in a massive state of revival (and tapes have a niche going, for some reason that I don’t fully understand), and while one fan is only going to buy one copy of the album/EP/single, there is no reason why that same fan won’t buy more than one t-shirt or a tote bag or a hat or stickers or a hoodie from the same band. I bought 4 shirts and a hoodie from Cardiff’s Shaped by Fate (before they split up), why? – Awesome artwork.

Shaped by Fate were/are an excellent example of a band producing high quality shirts, mostly because of their guitarist Richey Beckett’s insane skills with pens and pencils (he is a supremely talented illustrator). Each time they had a new shirt design produced, I found myself at their shows leaving the contents of my wallet at their merch table. So – let’s say you are in a band and you are thinking about getting some shirts made up, perhaps you are thinking about setting up an online shop…where should you start?

We all know someone who knows how to use Photoshop, who can “knock something up for you”. I don’t care if it’s your brother, friend, someone you were in school with or your father’s brother’s sister’s cousin’s former room mate (Spaceballs…anyone?) be wary. The wisdom is simple:

If you don’t have quality artwork, expect to sell your merch only to your friends and your family. They will buy things to support you and that’s about it. If you want to sell merch to strangers, you know people who are discovering your band and or fans of your music, then it will make it one hell of a lot easier if it looks amazing and is produced to a high standard. How do you go about this? If you are a local band, do some research. That can be anything from asking other bands you play with who designed their stuff or getting onto the old googlebox and seeing what comes back.

If you are a more established band, the above still counts and there are some incredible shirt design communities out there (mintees.com for example) as well. The important thing is get on your computer, get looking, find someone, get awesome work done, shift merch and make money that can pay for more recording, offset touring costs, more merch…

I’ll finish this on two questions: If you have cheap looking merch, with little more than a small band logo on it, do think you will be able to sell that for a premium price that might keep the band in positive equity? Or… Is it worth paying a designer to make you a quality artwork that will be easier to sell in great volume at a higher price? If you don’t believe me, here is a thought.

As an example of a touring band who really think about their merch, Suicide Silence take on somewhere between 30 – 40 t-shirt designs (and that is just t-shirts) on tour with them. They have so much merch that they need a separate trailer! If you have that level of variety, there is pretty much something for everyone, and they might even buy 2 or 3 – because the designs have been thought out and appeal specifically to their fans.

That was a guest blog by Michael Partridge. He’s on twitter as @DefyDesigns . If you want to write a guest blog for us, why not get in touch here?