Buy your way into the charts!

Well, that seems to be the premise. New company Chartfixer promises to get your track into the charts. But at a cost. They claim to legitimately achieve this paying its users to download your tunes, which you obviously stump up for.

I wonder how long it will take the various chart organisations to ban this? Or is it a fair way to play the system?

Update – Chartfixer appears to have closed down. Seems like it didn’t take long for the authorities to take action….

Here in Cardiff we recently had an amazing TEDxCardiff event with loads of great speakers. One talk stood out for us, and one that should be of interest to all our readers. Dave Haynes is the UK head of Soundcloud, a brilliant service for music makers everywhere. We love it, and Dave’s a really nice guy too.

Full disclosure: TEDxCardiff was organised by Neil from Dizzyjam… 😉

Ellie Goulding as a mouthpiece for X-Box?

We were invited along to the X-Box Reverb-sponsored Ellie Goulding gig a few weeks ago in Cardiff. It was in the recently opened Cardiff Arts Institute. Despite having reservations over the way the campaign had made several venues campaign against each other to be the “chosen” venue, potentially driving divisions in a scene small enough to be more unified, it was interesting to watch the buzz swell on Twitter and other social media channels.

We arrived, greeted by a large promo team shipped in from London to grinningly sign people in and ask for their Twitter passwords so that they could tweet what a great time they were having on their behalf every time they passed a special digital “keycard” over several hotspots scattered around the venue. Alongside this, they’d brought in tens of thousands of pounds worth of X-Box consoles, flatscreens, and AV equipment to make this a gig that Cardiff Arts Institute would possibly never see the like of again. For a venue that can hold just a few hundred people the likelihood of a local promoter being able to spend this kind of money on production is infinitessimally small.

And so, as our minds turned to how artists are increasingly aligning themselves with brands over traditional record labels, one of our number returned from a trip to the toilets with a piece of paper they’d
found. It essentially detailed all the things that golden girl Ellie Goulding should say about X-Box when speaking to the press. It was media training on a single side of A4. 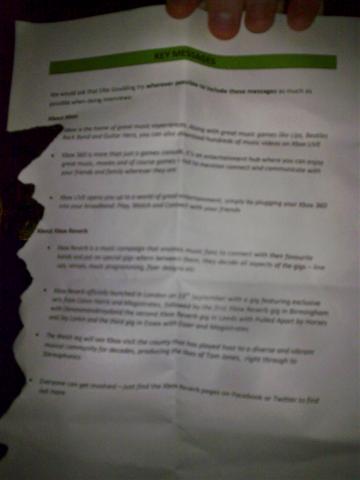 It opens with this statement:

“We would ask that Ellie Goulding try, wherever possible, to include these messages as much as

Then it continues with these choice cuts that Ellie is requested to casually drop into conversation with journalists:

“XBox is the home of great music experiences, along with great music games like Beatles Rock Band and Guitar Hero. You can also download 100s of music videos on XBox Live”.

“XBox 360 is more than just a games console – it’s an entertainment hub where you can enjoy great music, movies and of course games. Not to mention connect and communicate with your friends and family wherever they are”.

“XBox Live opens you up to a world of great entertainment simply by plugging your XBox 360 into your broadband. Play, watch and connect with your friends”.

There then follows some press gumph about XBox and XBox Reverb (their music community brand). We made a copy of the original piece, and then handed it over to a journalist friend of ours. He later questioned some of the promo team about the document, but they immediately confiscated it and refused to return it. Boo!

While we’re completely open-minded about artists working alongside brands if they feel that’s a legitimate means to an end, and a way to reach their fans, we’re distinctly uncomfortable about them becoming mouthpieces for the brands. Is it too much to expect an artist to regurgitate marketing copy of a product they’re affiliated with, despite the fact that this is increasingly becoming a legitimate means of gaining exposure for your music?

Are you happy with the level of influence that brands are now starting to have over the acts they’re associated with? Or is this no different to them being signed up to advertise a product in the same way that Hollywood actors do with coffee, aftershave, cars etc….?

We’re teaming up with Storm The Charts to raise money for charity – Storm The Charts is an fantastic, ambitious grassroots campaign to get 40 different unsigned bands into the top 40, all in one given week.

We’re pleased that here at Dizzyjam we’ll be supplying the official t-shirts, and any proceeds from both us and Storm The Charts will go to EDGE, a zoological charity that specialises in the conservation of ‘Evolutionarily Distinct and Globally Endangered’ species.

BUT…. We don’t have a design for this t-shirt, and that’s where we’re throwing it open to you: send us your Storm The Charts designs: you can follow their current flag-style logo, or you can go off on a tangent (as long it’s a good-looking tangent). It’s a one-colour design, and you’ll have to follow our design guidelines here and ideally you’ll get it to us by Sunday 7th March Sunday 14th March as time is tight, and the sooner we get it for sale, the sooner we can start raising money for charity.

Send your finalised designs to [email protected] where they will pick a winner.

https://www.dizzyjam.com/dj/help/design_guide/
Examples of designs that work with our process are here, here and here.

Get going, and get raising money for those strange and beautiful animals!

Try saying that 5 times in a row….

We were very proud to be one of the sponsors of last year’s amazing Swn festival. We printed these amazing shirts for them, but we have a couple left over that we’d love to let you guys have for free. 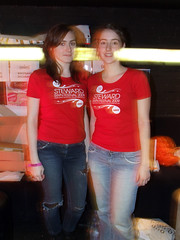 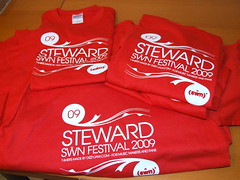 There’s ten in total, all in a fetching red, and we’ll give them to the first ten people to contact us here, remembering to tell us your size and whether you’re a male or female. And don’t forget you can buy a “normal” Swn t-shirt from their Dizzyjam shop.

UPDATE: We have no men’s t-shirts left, sadly. We need more women to ask for free t-shirts! But if you make or play music you should still click here to find out how we can help you sell t-shirts to your fans.

UPDATE No.2 – We only have ladies medium or large left! 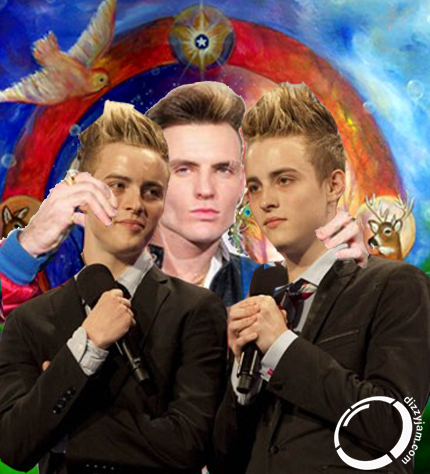 Yes, that’s right people. The musical collaboration we’ve all been dreaming of, and praying for, is finally happening.

Jedward are teaming up with Vanilla Ice. You heard it here first. Unless you read this link with all the details before you heard it here, of course.

Can you hear my shirt? 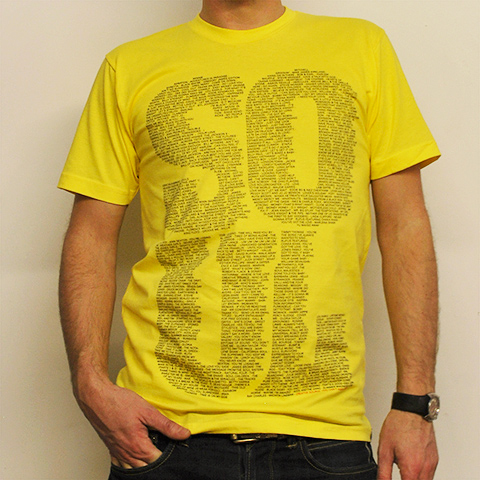 It’s a t-shirt with a brilliant soul playlist on it, that you can listen to via Spotify here. And you can buy it here.

Thanks to everyone who’s got involved over the last few months. We’re stupidly excited about the developments we’re going to be bringing you early next year.

So stay tuned. Hope you like the video. Clearly it’s influenced by the work of Ingmar Bergman, with the budget of a Roland Emmerich movie….

Santa’s got a fat load of Dizzyjam t-shirts to deliver over the coming weeks, but depending on where you are, you need to think pretty quickly about getting orders in*:

* All times/dates are those in the UK. And we can’t guarantee delivery by these dates. They’re the dates provided by the lovely Royal Mail, and are just their estimates. But if you get your order in by the correct time, you should be OK….

We’re pleased to announce that as of today, after lots of testing we can offer womens t-shirts on dizzyjam.com. This means we’re one significant step closer to moving out of beta and into… er, whatever comes after beta.

If you’re an existing shop owner, you’ll have to log in and create new women’s t-shirts. We realise this is a bit of extra work for you, but we didn’t want to automatically assume that you would want women’s t-shirts available, and what colours you’d want them in. It’s your shop, and we try to stay out of the way as much as we can and let you choose the colour combinations you want.

We’re already working on ways to cut down on the time needed to create your t-shirts, including having an “image bank” of your designs so you don’t have to upload a fresh image each time. If you’ve got any suggestions, leave us a comment.