Well that was fun wasn’t it? We’re glad to have been a part of RSD11, where we camped ourself in Spillers Records in Cardiff, and made and customised the famous Spillers Records t-shirts ‘live’. 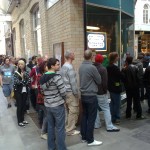 When we arrived at opening time, we were greeted by a humungous queue, all waiting for the exclusive RSD releases. So we got ourselves some tea, and waited for everything to calm down. Except it didn’t, in fact the queue kept getting bigger as the morning wore on. How great is that? Music fans turning up super early and keeping independent shops going strong.

In between the madness of the morning, and the bands on in the late afternoon, we were kept busy at the Dizzyjam stand making the shirts, saying hello to customers, and drinking more tea. We drank a lot of tea – it’s compulsory if you work in a record shop.
Early reports show that the day was a massive success, with album sales being up 20% overall, and NINE of the top ten vinyl albums were 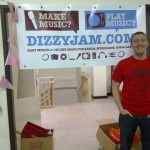 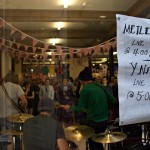 RSD exclusives, despite being on sale for only one day.