Vinyl, bombs and afrobeat – Frank Gossner of Voodoo Funk talks to us.

For most of us, collecting records amounts to a trip to our local independent music shop or digging around at a record fair in the hope of stumbling across something a bit different. Frank Gossner, however, isn’t like most of us.

In 2005, inspired after discovering a rare afrobeat LP in a Philadelphia record store, Frank upped sticks and moved to West Africa where he began to dig — literally — for African Funk records. Along the way he wrote about his experiences on his blog, Voodoo Funk, capturing not just the music he found but the stories of the people and places behind it.

We were lucky enough to catch up with Frank to talk more about his musical background, reissuing records, and why he decided to set up a Dizzyjam store. 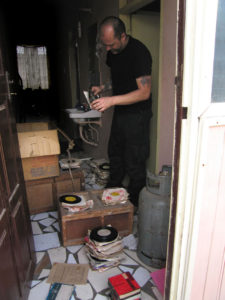 Tell us a little about your musical background up to this point.

I started DJing in 1994 in Berlin where I developed the Vampyros Lesbos Party, an event that was based around Jess Franco’s sexploitation movies from the late 60s to early 70s. Back then I played a lot of French Yeh-Yeh records and Hammond heavy library funk. These events also featured a custom made, chrome plated go-go cage and various video and slide projections featuring my vast collection of naughty movies, lobby cards and movie posters.

In 1996 I moved to NYC with my records and go-go cage where the Vampyros Lesbos Party became a weekly nightlife classic, before moving back to Berlin to start the Soul Explosion parties, where I played out all of the Deep Funk 45s I had bought during my stint in NYC and on various digging trips to the South of the USA. In 2005 I moved to West Africa for three years where I constantly moved around, buying loads and loads of Afro Funk records.

Where did your interest in African vinyl come from?

After playing out Deep Funk 45s for five years I needed some fresh material to dig into and Afro Funk and Nigerian Disco seemed like a logical progression.

What is it about this genre of music that you’re drawn to?

It feels good to listen to it and it makes people dance.

And how does it feel to see people enjoying these records, knowing they might never have heard them otherwise?

To be honest, when I play these records at a party I just enjoy myself along with everybody else. I don’t see myself as some sort of messiah who brings unheard tunes to people who don’t know them. It’s just records that contain other people’s music, how should I take any credit for this… I just enjoy sharing this feeling of pleasure with the crowd.

You said the Pax Nicholas LP was one of the first African records you found and that it still feels special. Are there any others that hold particular meaning for you?

The first record by Marijata, titled “This is Marijata“, holds maybe even more of this feeling for me, particularly because of the truly timeless lyrics and of course also because of the musical impact.

You’ve been in some pretty dangerous situations. Did you ever reach a point where you started to question whether the risk was worth it?

I was never that concerned about my own safety but I had strong moments of doubt when, for example, my friend Ken who is from Ghana traveled to Northern Nigeria for me and narrowly escaped a bombing in Kaduna some years back. He had just left the hotel for a bus ride to Kano when only about one or two hours after his departure the hotel, where he had spent the last couple of days, was blown up by Boko Haram. 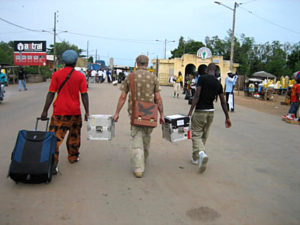 Are you still collecting — is there anything in particular you’re hoping to find?

I’m still getting in new stuff but I don’t hunt for specific records. Pretty much everything I know about I already have so I’m basically looking for the unknown stuff.

Does your label have any reissues in the pipeline?

I’m going to put out two more 45s, one by Emma Baloka and another one by Joe Brown & his Black Men and that will be it. I might continue playing the occasional club gig on an on-and-off basis but other than that I’m either going to retire or start doing something totally different with my life, I haven’t yet figured out which.

With such a great collection to draw from, how do you choose which ones to reissue?

There are two major factors: the record has to be consistent enough and not just offer one or two great tracks and then, of course, I need to be able to find the artist(s) to make a licensing deal.

What made you choose Dizzyjam to start selling merchandise?

They asked me one day and I thought, why not give it a try? What appealed to me most was the ease at which this could be done and I was surprised at how well it took off and the sheer number of shirts that sold.

How do you come up with the different designs for your merchandise?

The original designs are mostly lifted from various record covers. I did all the artwork myself.

Aside from your blog, have you thought about documenting your collection in some way?

Not really. I’m not a musicologist nor do I see myself as running an archive. In fact I’m in the process of retiring from the DJ game. Next year I’ll be 50… to me this seems to be the right point to call it quits and find a new focus for my life. I’m already in the process of selling my collection. I’m keeping a copy of each of the records that I enjoy playing out the most and might continue DJing for another year or so but eventually everything will have to go.

Finally, can you recommend some albums for us to listen to?